This week at SFC: Carmen and Geoffrey 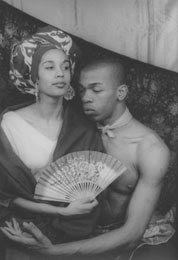 
STUDIOFILMCLUB is located in the front foyer space of building 7.

Our screenings are FREE and all are welcome to.

This is a love-story of Carmen De Lavallade and Geoffrey Holder, who have been happily-married for 53 years. Carmen was discovered by Lena Horne and got her start in the Fifties as a dancer, appearing in Hollywood films like "Carmen Jones"and "Odds Against Tomorrow." However, she achieved fame as a soloist with the Alvin Ailey Company and as a prima ballerina with the Metropolitan Opera. Today, Carmen, a renowned choreographer, has been on the faculty of Yale since 1970. Geoffrey, the 6'6" gentle giant, was born here in Trinidad and made his way to New York where he broke into showbiz on Broadway as a dancer. His myriad talents led to noteworthy accomplishments not only as a dancer but also as an actor, director, choreographer, costume and set designer, painter and musician. His stage career peaked when he won a Tony award for directing "The Wiz." As engagingly chronicled by co-directors Linda Atkinson and Nick Doob, "Carmen & Geoffrey" not only depicts a pair of extraordinary over-achievers but also a touching portrait of a very loving couple.

Carmen & Geoffrey (2004)
NYT Critics' Pick This movie has been designated a Critic's Pick by the film reviewers of The Times.
March 13, 2009
Creatively Connected Through Dance and Life
By STEPHEN HOLDEN
Published: March 13, 2009

âI walk through doors,â Geoffrey Holder thunders in the documentary âCarmen & Geoffrey.â âIf Iâm not wanted in a place, thereâs something wrong with the place, not with me.â And when this 6-foot-6-inch choreographer and painter, with a big toothy grin and the oratorical style of a Caribbean James Earl Jones, thunders, the earth moves.

Mr. Holder has been a fixture in the theater and dance worlds beginning with the 1954 musical âHouse of Flowers.â His words evoke his fearless self-confidence in the face of racism. The Carmen of the title is Carmen de Lavallade, Mr. Holderâs wife and creative partner for more than 50 years; now in her 70s, she is still a beauty.

As the film, directed by Linda Atkinson and Nick Doob, follows Mr. Holder, he radiates the energy of a sun king. By his side is Ms. de Lavallade, the New Orleans-born dancer and choreographer who grew up in Los Angeles and met him when they appeared together in âHouse of Flowersâ; they married in 1955.

The film spends the bulk of its time with Mr. Holder, who recalls that from early childhood he knew he wanted to dance and to paint. He was 7 when he made his performing debut with the Holder Dance Company, a troupe founded by his older brother, Boscoe, with whom he had a loving but competitive relationship. By the time he was discovered by Agnes de Mille in 1952, Geoffrey Holder was already an accomplished painter, and the canvases shown in the movie suggest the sensibility of an extroverted Paul Gauguin steeped in Caribbean folklore.

After âHouse of Flowersâ he formed his own dance company and was also a principal dancer with the Metropolitan Opera Ballet. He reached a pinnacle of acclaim in the mid-1970s with Tony Awards for best director and costume design for âThe Wiz.â The fantastic outfits bore his artistic signatures: a brilliant palette and wildly playful and inventive imagery. The clips of his choreography and costumes for âTimbuktu!â (a 1978 Caribbean version of âKismetâ) and âThe Prodigal Prince,â a dance biography of the Haitian artist and voodoo priest Hector Hyppolite that he calls his answer to âGiselleâ and âSwan Lake,â reveal work that was even bolder.

âCarmen and Geoffreyâ is crammed with excerpts from pieces the couple created or performed in, separately and together, over 50 years. An informed, affectionate commentary on their work is provided by Jennifer Dunning, a former dance critic for The New York Times, whose biography âGeoffrey Holder: A Life in Theater, Dance, and Artâ was published in 2001.

The film includes an excerpt from Ms. de Lavalladeâs signature piece, âPortrait of Billie,â an angular modern dance tribute to Billie Holiday choreographed by John Butler. Ms. de Lavallade, we learn, was the best friend and dancing partner of Alvin Ailey, who was brokenhearted when she married Mr. Holder, although their relationship was platonic.

The film follows Mr. Holder on one of his annual visits to Paris, where he reflects on the American expatriate performer Josephine Baker. She was a kindred spirit who was lionized in Europe but not in America, where she tried to walk through doors only to have them slammed in her face because she was black.

âCarmen & Geoffreyâ leaves you wondering why its subjects are not widely recognized as national treasures. The marginalization of the dance world in American culture is certainly one factor. But so is the subtle but still pervasive racial attitude that views work like Mr. Holderâs as âexotic.â What does it say about our culture that Mr. Holder is probably best known as the voice in the âuncolaâ commercials for 7-Up?

This week at SFC: The Diving Bell and The Butterfly

The Studiofilmclub is located in the front foyer space of building 7.

Our screenings are FREE and all are welcome.

The Diving bell and the Butterfly is a true story about Elle magazine power player Jean- Dominique Bauby who suffered a severe cerebral-vascular accident that resulted in a rare condition known even in French as "locked-in syndrome." he is completely paralyzed save for one eyelid, but fully alert and conscious. His only means of communication is through blinking that eye. In his 1997 book of the same name, Jean-Do (as he prefers) vividly likens this condition to being trapped, semi-buoyant, in a diving bell beneath the water, the heavy brass suit with a hose to the surface. No words can be heard, no movement made.
Thanks to the staff at the hospital in which he resides, particularly speech therapist Henriette Durand and transcriber Claude Mendibil, he is able to write his story.


The Diving Bell and the Butterfly/2007/112mins/France:USA

We wake up when he does, out of a coma of weeks' length, to discover that he is buried alive in his own body: He's frozen, unable to move his body except for one eyelid. It's absolutely horrifying, not just for the sympathy it evokes but
for how director Julian Schnabel puts us so entirely in the head of stroke victim Jean-Dominique Bauby that you experience his horror: the camera blinks Bauby's panic and disorientation as faces swim in and out of view, as voices burble up as if from underwater, as the nightmare reality sets in. He -- we -- cannot move. Schnabel eventually lets us out of Bauby's head as the limits of his recovery are explored, but we never forget feeling as if we are at Schnabel's small mercy -- we always are, of course, forced to see a cinematic story through a filmmaker's eyes, but this is an astonishing reminder of that, which makes The Diving Bell and the Butterfly as intellectually gripping as it is emotionally compelling.
Based on the true story of Bauby, a French magazine editor who suffered a massive stroke in 1995 when he was only 43 and a vigorously alive and vibrant man, this is adapted from the book he laboriously wrote after his brain trauma by blinking out words, one letter at a time, with the help of a speech therapist, about, well, what he learned about the meaning of life by almost dying and having his world reduced to almost nothing. This is not, however, one of those easy or charming movies about overcoming adversity -- Bauby was a complicated man, and the astonishing
performance by Mathieu Amalric (he'll appear in the new Bond movie Quantum of Solace) makes it tough to actually like Bauby. Now nominated for four Oscars -- including for Janusz Kaminski's eerie cinematography, Schnabel's direction (the native New Yorker actually learned French so he could tell this story in its native language), and Ronald Harwood's adapted screenplay -- this truly is one of the best, most haunting films of 2007.

posted by Attillah at 8:44 AM 0 comments

This week at SFC: My Architect

STUDIOFILMCLUB is located in the front foyer space of building 7.

Our screenings are FREE and all are welcome to ALL.

A traditional quest, superbly told. Nathaniel Kahn seeks to understand the life of his father, the architect Louis I. Kahn (considered by many historians to have been the most important architect of the second half of the twentieth century), a task made even more difficult by the fact that Kahn had three separate and coexisting families: a wife and two mistresses with one child apiece. For his part, Nathaniel was an illegitimate son and only eleven when his father died; his interviews are laced with raw, uncut feeling for a man he never really knew. Throughout the documentary, he uses Kahn's buildings (beautifully photographed) as a kind of wedge into his father's motivations and personality. He discovers that Kahn's more famous contemporaries, like I. M. Pei, appear haunted by his career: is it better to have designed three or four unexampled buildings, as Kahn did, or to have had a successful, high-profile architectural practice? Perhaps more surprisingly, the women in Kahn's life don't regret the way he treated them. Anne Tyng, Kahn's co-worker and mistress, explains her affection this way: "The ideas that you work on together connect you always somehow." In the end, Nathaniel's homage to his father demonstrates what it was like to be caught in his creative whirlwind and asks: where does an artist truly live? In his life, or in the work he leaves behind?

posted by Attillah at 8:27 AM 0 comments

This week at SFC: Midnight Cowboy

STUDIOFILMCLUB is located in the front foyer space of building 7.

Our screenings are FREE and all are welcome.

The first, and only, X-rated film to win a best picture Academy Award, John Schlesinger\'s Midnight Cowboy seems a lot less daring today (and has been reclassified as an R), but remains a fascinating time capsule of late-1960s sexual decadence in mainstream American cinema. In a career-making performance, Jon Voight plays Joe Buck, a naive Texas dishwasher who goes to the big city (New York) to make his fortune as a sexual hustler. Although enthusiastic about selling himself to rich ladies for stud services, he quickly finds it hard to make a living and eventually crashes in a seedy dump with a crippled petty thief named Ratzo Rizzo (Dustin Hoffman, doing one of his more effective \"stupid acting tricks,\" with a limp and a high-pitch rasp of a voice). Schlesinger\'s quick-cut, semi-psychedelic style has dated severely, as has his ruthlessly cynical approach to almost everybody but the lead characters. But at its heart the movie is a sad tale of friendship between a couple of losers lost in the big city, and with an ending no studio would approve today.
Edited by Hugh A Robertson (director of BIM and OBEAH)...

posted by Attillah at 9:26 AM 0 comments

Since February 2003, SFC has offered screenings of Caribbean, foreign-language, independent and art-house films to Trinidadian viewers, in casual, low-frills surroundings with an eclectic, free-and-easy atmosphere. Doors open most Thursday nights at 7.30; main feature starts at 8.15. All screenings are FREE

For more information, or to sign up for the StudioFilmClub e-newsletter, email studiofilmclub AT gmail DOT com

Read an article on SFC by Lisa Allen-Agostini, published in the Trinidad Guardian, 6 May, 2003

Check out STUDIOFILMCLUB, a book of Peter Doig's posters created for SFC screenings